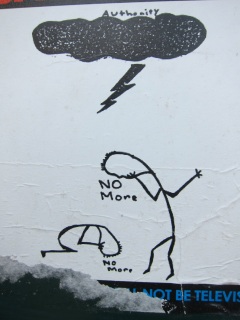 “They have you doing a lot of jobs at once,” I remarked to the young man who was attempting to simultaneously work the register and dole out rewards to customers redeeming their game coupons.  It struck me that “they” was an umbrella statement to cover some anonymous figure who I believed to represent management or authority.  They was faceless.  I have come to expect a they for airlines, hotel chains, large box stores, telephone solicitations and such.  I am more alarmed when the concept of they trickles down to small organizations.  If the concept of they embeds itself into a micro-enterprise, the coalition of those dedicated to a shared purpose is lost along with trust and authenticity.


When we describe management or authority as ‘they’ then the most powerful point of interface fades away, the human connection.  When we no longer connect with a person then we jettison emotion.  I have yet to met an organization that could make an emotional connection (can Apple Co. really love you), however I have encountered a lot of people working for great causes that fostered a personal relationship.  There is no they when the team has names, stories, and time to build connections with those it serves.