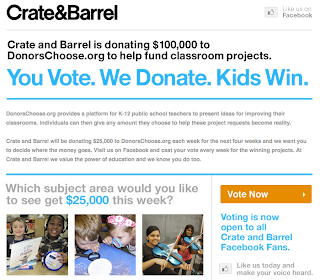 Here is an example of a campaign that is less transactional that some of the ones I noted in my Its About Trust post last week.  If you want a vote you still needs to be a Facebook fan of Crate & Barrel (the hook still exists which leading practices says is manipulative) but Crate & Barrel is committed to giving the money regardless of the number of fans and votes.  In an ideal world, Crate & Barrel would open the voting to everyone and trust that those that appreciated their generosity would become fans.  If Zappos is willing to trust that customers will not abuse the free return shipping policy (which could be a significant cost) then why not allow everyone who believes in the causes you are supporting to vote.  Some of these voters will become fans based on their own motivation and the retention rate of these fans (the stickiness of their relationship) will be quantifiable higher than those who opted in just for one purpose.

Manipulation works until you lose your leverage.  Trust works far longer and the rewards are much higher.